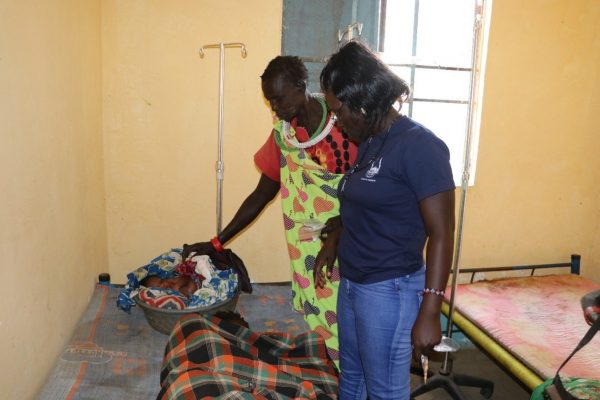 Islamic Relief’s lifesaving programmes in Kapoeta County in Eastern Equatoria State have been providing nutrition services to hundreds of acutely malnourished children in the Lopua village, Kapoeta East. Within a period of less than six months, 166 cases were diagnosed with severe malnutrition, with 218 being admitted in the Outpatient and Therapeutic Supplementary Feeding Programme.

Several young mothers in Lopua whose children were privileged to undergo these services have described their encounters with malnourished babies, terming them as sad predicaments.  Lorot Nachebe, a young mother of an acutely malnourished child in Narus in Napot Pot explains how she failed to stop her baby from crying constantly. “My daughter felt sick, she frequently passes watery stool, and this has been worsened by low breast milk because of insufficient feeding.” Napot further explains that, “She cries endlessly, and I thought she was going to die the next hour. I and my husband were desperate for help.”

Nachebe trekked 50 kilometres from Napot -Pot seeking medical service at the Islamic Relief health facility in Lopua the following day. ‘’ I thought my children were going to be attended to immediately, unfortunately, the facility was a beehive of activity.” Nachebe explains, “Hundreds queued up at the door of the clinical doctor for help.”

“My child screamed loudly, and this caught the attention of the health workers. The most interesting moment of my encounter with the Nutrition Assistant is how she was able to screen and establish the measurements for my child (weight, height, Mid-upper arm circumference (MUAC), and also did appetite test within a very few minutes,” Nachebe narrates.

Her child was later admitted into the Out-patient therapeutic programme. The mother was given ready to use Supplementary Feeding (RUTF) Plumpy Sup for six weeks and encouraged to continue with breastfeeding.

Established by Islamic Relief through the Disaster Emergency Committee funding in 2017, the Lopua Primary Healthcare Unit (PHCU) in Kapoeta East is the first health facility in the area. High illiteracy rates and a strong belief in traditional cultures continues to erode the effective delivery of health services for all in Kapoeta East. Other component of this project includes provision of Water, Sanitation and hygiene services to conflict affected people in Keji Keji County in Central Equatoria State.